With its balmy weather and stunning beachfront cities, Portugal has earned a reputation among modern nomads as the Eurozone’s hidden gem. Some are drawn in by its incredible tax benefits, while others come for relaxation and a high standard of living. Regardless of where you choose to live, rest assured that you can immerse yourself in the best cities in Portugal and still enjoy one of the most affordable costs of living in Europe.

Portugal sits next to Spain on the Iberian Peninsula, surrounded by the Atlantic Ocean to its West and South. It’s a party to the Schengen Agreement, so EU visa holders won’t need to do any paperwork when arriving. Travelers from Canada, Mexico, and most Latin American countries don’t need a visa either. If you are arriving in Portugal from the United States, you can get a visa-on-arrival at the airport.

If you are traveling here from outside of Europe, expect your flight to take between seven and twelve hours. You’re best off choosing an airline that offers comfortable seating and at least two meals. To make sure you can kick back and relax while you’re in the air, make sure to pick up a neck pillow, a travel blanket, and a quality pair of headphones before you leave.

Once you have your visa in hand and you’re ready to start exploring, check out the five cities below before deciding on your new home. Each location on our list has its own edge, but everyone makes a strong case to be considered the best city to live in Portugal.

Second only to Lisbon in size, many consider this city to be one of the best places to live in Portugal. Although the greater Porto’s metro area is home to more than two million full-time and part-time residents.  This low population density makes it feel far less crowded than most international travel hubs.

No matter when you visit, you’ll find Porto’s temperatures mild year-round. However, it has a rainy season that typically starts in December and can last through the end of March.

Beautiful parks scatter throughout Porto’s main cobblestone streets, and the city’s historical buildings pay homage to various periods in Portugal’s history. Fall is the perfect season to visit Porto’s famous vineyards, and we offer an all-inclusive, seven-day winemaking adventure package that includes interactive tours of Duoro Valley and Monção. If you consider yourself a wine connoisseur, then Porto may be your favorite Portuguese city.

With charming neo-classical architecture that dates back to its days as Napolean’s main Portuguese outpost in the early 1800s, Mafra has to be included on our list of Portugal’s best places to live. Mafra is small with an inviting atmosphere, and it’s located only a short taxi away from Lisbon’s main airport.

In 2019, UNESCO named Mafra National Palace, a sprawling royal estate built in the 17th century, a World Heritage Site. Overall, Mafra is a cozy metropolis that’s perfect for a summer retreat or a fall getaway.

If you love fresh seafood and beachside living, Cascais is the ideal city for the next chapter in your life. Surrounded by the mighty River Tejo, the town’s markets offer delicious mussels, wild-caught crabs, and even octopus seasonally. Locals in Cascais are welcoming to nomads, so don’t be surprised if you end up having lunch with the fishermen who caught your meal that day!

Guincho Beach, one of the most popular destinations in Cascais, offers some of Portugal’s best waves for surfing.

Cascais also boasts the legendary Carcavelos Beach that’s home to the annual Billabong Pro International Surfing Competition in October. If surfing isn’t quite your thing, then make sure to hop on a ride to Sintra-Cascais Natural Park instead. Set on the Portuguese Riveria, this park is home to the historic Castle of the Moors and Pena Palace.

Besides its natural beauty, Cascais also has an upscale downtown shopping area that houses international retailers like Hugo Boss and Max Mara. There are also plenty of local merchants selling artisan goods all over the town for you to explore.

Like Cascais, Nazaré also offers coastal living and great beaches with lots of local markets and fresh food. Nazaré, however, is a bit more of an expat haven. The city welcomes many tourists in the summer, but it’s never too crowded if you’re settling in. After summer, surfing enthusiasts from all over Portugal descend on Nazaré to enjoy Portugal’s “Big Waves Season” from October until the middle of spring.

At less than 40 square miles across, Nazaré is by far the smallest city on this list. Living here is also light on your wallet if you have some solid haggling skills. The temperature doesn’t get much colder than 45 Fahrenheit in the winter and summer temps reach moderate highs of just under 90 degrees. Nazaré is the perfect city to spend some time off the beaten path without sacrificing the comforts of modern life. 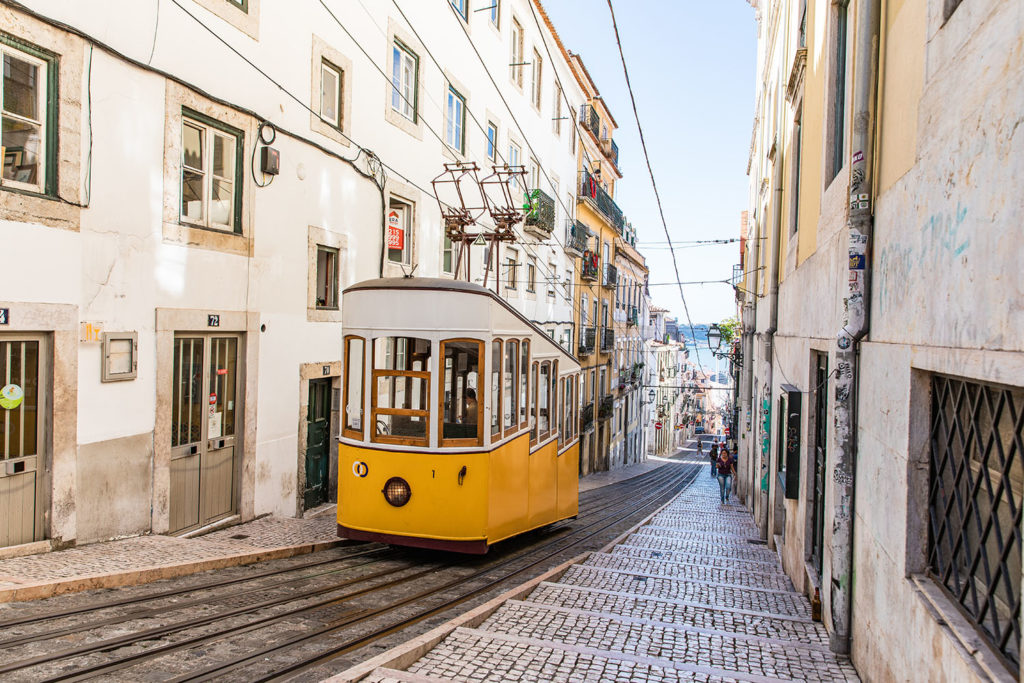 No list of the best cities to live in Portugal could be complete without including the capital Lisbon. Lisbon lies close to many cities on this list and is within a short trip of Portugal’s numerous World-Heritage Sites.

Lisbon has everything from shopping centers to modern dance clubs, along with a vast number of historical landmarks dotted around the city. Constructed in the 1100s, the Sao Jorge Castle tops the list of Lisbon’s most famous tourist destinations. Lisbon’s public transportation system runs smoothly, and the colorful streets are pedestrian-friendly. If you’re planning for a long-term stay in Lisbon, it pays dividends to have a Portuguese local negotiate housing rates for you.