The coastal city of Dubrovnik, located near the Adriatic Sea, has become an up-and-coming location for tourists in recent years. It’s most commonly known as the shooting location of the popular series, “Game of Thrones”. Aside from that, the city is known for its Old World charm, picturesque corners, and pebbled beaches, among many other attractions.  The best part is that day trips from Dubrovnik can take you to the most picturesque locations in the Balkan Peninsula.

Most of the places listed below are connected to Dubrovnik via a bus or ferry. You can easily find schedules here. You will also be outdoor for most of these destinations, so don’t forget your sunscreen and a sturdy water bottle!

This charming town near the Dubrovnik airport makes for one of the best day trips from Dubrovnik. Cavtat is only 30 minutes from Dubrovnik by car, or you can also take the local bus number ten, which runs every hour. 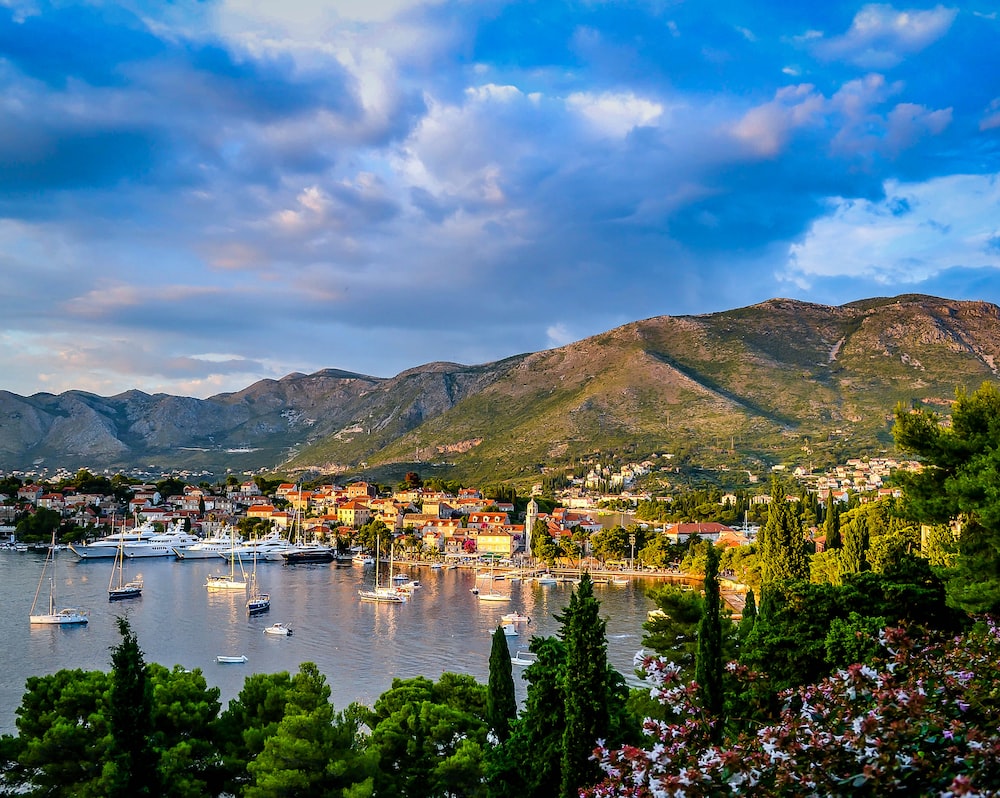 Known for its monasteries, old buildings with red roofs, and cobbled streets, Cavtat has a relaxed pace of life. You can begin sightseeing in the old town, where you can sightsee within the narrow streets. Other locations you must visit in Cavtat are Rector’s Palace (Knezev Dvor) and the Racic Mausoleum. The Mausoleum, commissioned by a wealthy local merchant family, was built in 1921 by famous Croatian sculptor Ivan Mestrovic.

Like many European coastal towns, Cavtat hosts a summer festival from June to September. Come relax and unwind at the many bars and restaurants in town. Enjoy some Croatian cuisine at La Boheme, or head to Ankora for a great selection of wine and cocktails.

Mostar is one of the most beautiful towns in Bosnia and Herzegovina. The fastest way to get there is to drive, which will take you 2 hours and 10 minutes. You can also take one of three local buses, which depart daily from Dubrovnik. 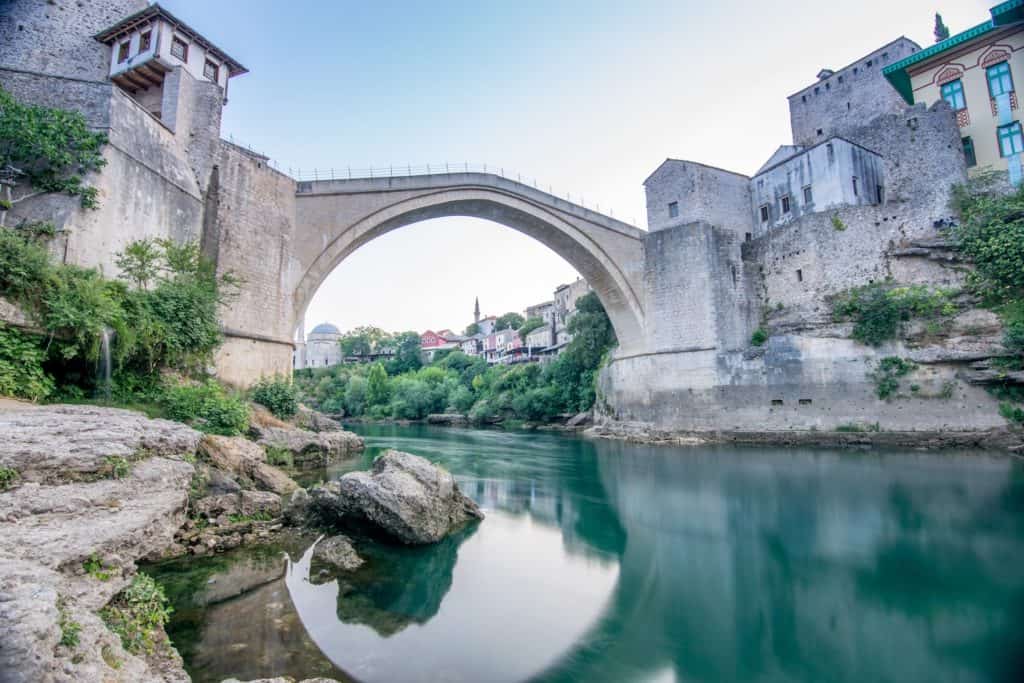 Famous for its beautiful Ottoman Bridge above the Neretva River (pictured above), Mostar is a real melting pot of culture. The original bridge, built in the 16th century, was once the widest man-made bridge in the world. What you may see now is a copy of the bridge, which finished construction in 2004 to celebrate Mostar’s multiculturalism. On its eastern side lies the Muslim part of town, while the Catholic Croats live on the other side.

Other sights to include on your day trip to Mostar are the old Bazaar Kujundziluk, Koski Mehmed Pasha Mosque, and the Karagöz Bey Mosque.

Budva is a festive town located in the neighboring state of Montenegro. It’s 96km (60 miles) away from Dubrovnik, and you can reach Budva via car in two hours.

The town is known for its nightlife, pristine nature, and numerous hotels. If spending your time bar-hopping and sunbathing at a pool is your idea of a vacation, then Budva is the place for you. Skaline Beach Bar, in the Vectra district, is one of the most popular places. The bar is located on a beach and is perfect for a midday drink. If you’re not into drinking, Cafe Berlin is a popular meeting point for tourists with an artsy and laid-back interior. 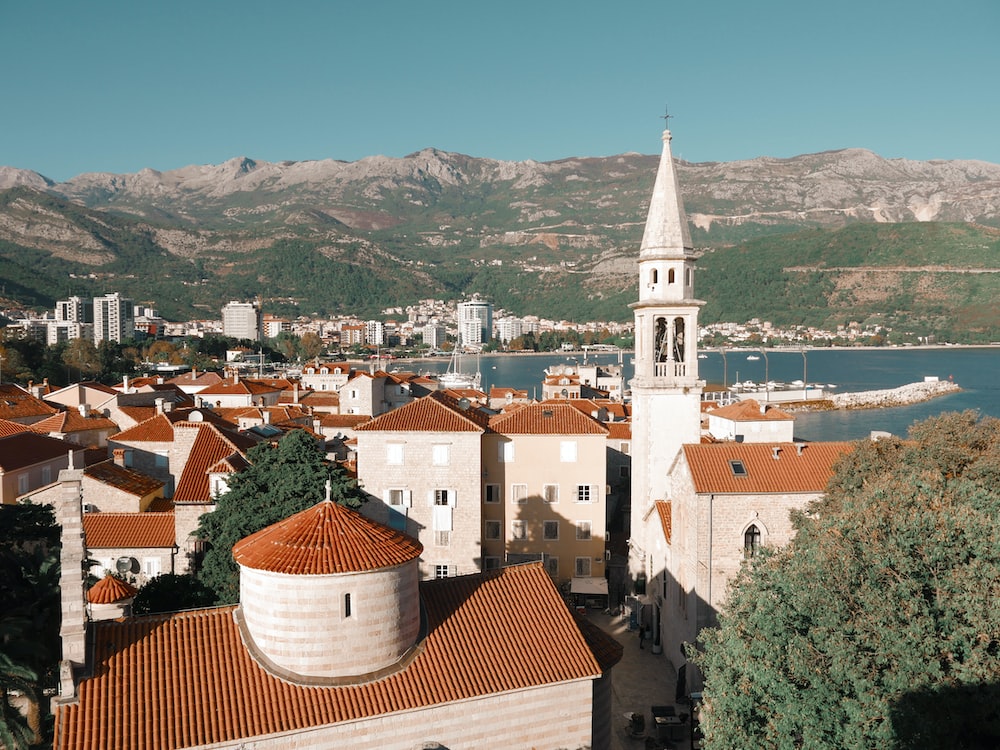 It isn’t hard to see why Buva is one of the most popular tourist spots in Montenegro. You can stroll the city in the morning, party until late at night, and then head back to Dubrovnik just by sunrise.

Located just 55 minutes away from Dubrovnik by car, Ston is a historical settlement in Southern Croatia. It has a long history of salt production, which was even more valuable than gold during the Middle Ages. Ston is also known for the longest city wall, only second to the Great Wall of China. It was built in the 14th century to defend the Republic of Ragusa from invaders.

Ston is also famous for its oysters, so don’t forget to try some on your visit here from Dubrovnik. We suggest visiting a local popular joint like Kapetanova Kuća or Konoba Bakus, which are both known for fresh seafood, delicious mussels, and a good selection of wines. 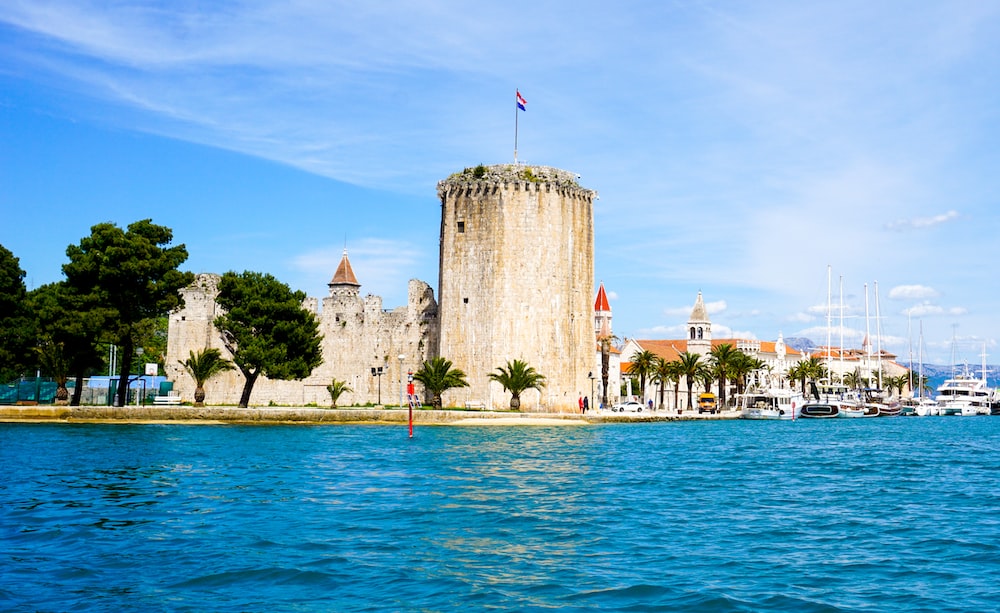 Three hours away from Dubrovnik, Trogir was named a UNESCO World Heritage site in 1997. This port city is a melting pot of beautiful Renaissance, Baroque and Romanesque architecture. Trogir is also connected to the island of Čiovo and the mainland of Croatia by hanging bridges.

Some architectural marvels in Trogir are Trogir Cathedral and the Cipiko Palace. The best time to visit Trogir is during the summer months when beaches are buzzing with tourists. We recommend having a tasty meal on the patio at Škrapa, a restaurant famous for grilled Dalmatian food at fair prices.

Located 230 km (143 miles) away from Dubrovnik is Split, the largest city in Croatia. Although it takes a longer journey than other cities on this list, its architecture makes it worth the visit. You can either take a flight, which takes 40 minutes, or take the ferry which takes around four hours. 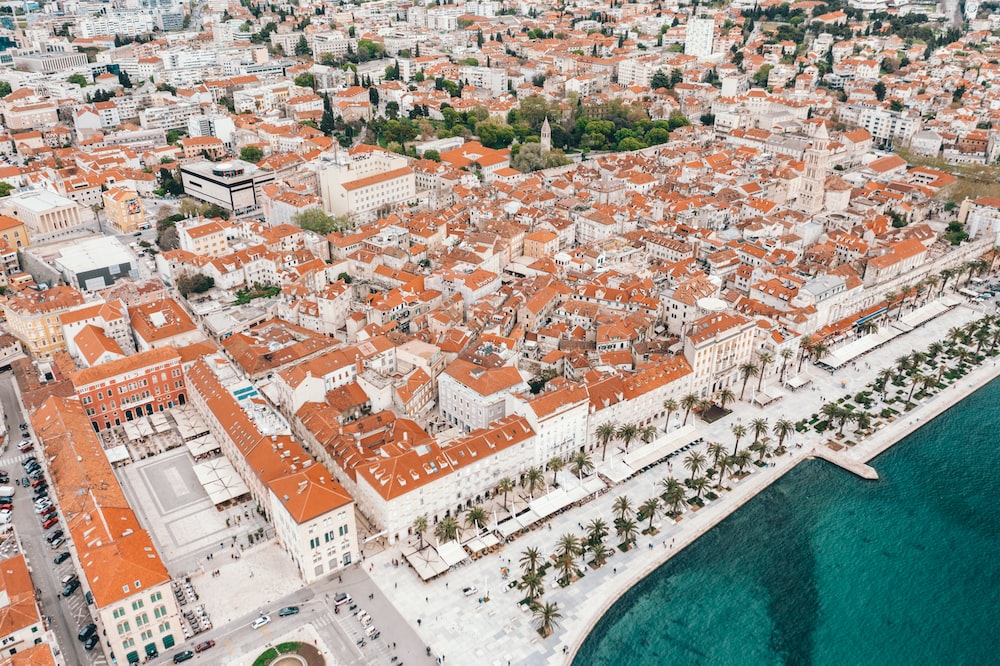 Located between the mountains and the sea, the city is built around the 1,700-year-old Croatian Diocletian’s Palaces, which were featured on the Game of Thrones series. A lot of these palaces are now ruins, but you will find lots of shops, cafes, and restaurants within their old walls. Sperun, a traditional Dalmatian konoba tavern, is a great choice for lunch in this area.

Other places to visit in Split are the pedestrian-only Old Town, the Cathedral of St. Domnius, and the Temple of Jupiter. Take in the beauty of Split by strolling along the Riva seafront promenade. Afterward, go off the beaten track and explore the beautiful Marjan Forest Park and the Marjan Stairway.

Experience the best of the Mediterranean coastline in the Peljesac Peninsula, located 90 minutes away from Dubrovnik. Known for the clearest water in Croatia, this area is home to the towns of Orebic, Trpanj, and Ston. The Peninsula is also famous for its red wine, made from the Plavac Mali grapevine. Visit the Matusko Winery, which is one of the most famous local vineyards.

There are also numerous beaches here, the most famous being the Trstenica beach that stretches over 1.5 kilometers. The Peljesac Peninsula is the perfect place for a lazy beach day next to a velvety glass of vino.

This walled island is one of the most beautiful spots in the Baltic region. Famous for being the birthplace of Marco Polo, it’s located just two hours away from Dubrovnik by ferry. It certainly makes the case for one of the best day trips from Dubrovnik. 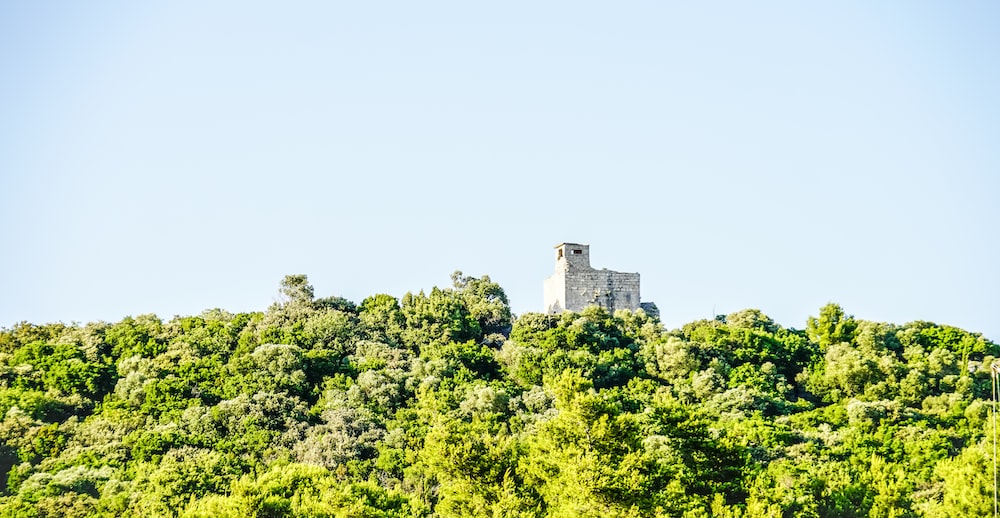 Korcula has sandy beaches dotted all over the island. No matter where you are, you’re only a few steps away from a refreshing swim in the sea. Some of its popular beaches are Pupnatska on the Southern shore, Przina in Lumbard, and Sveti Nikola in Korcula town. However, its best beaches are in remote locations that are only accessible by a truck or 4×4. Make sure you have rubber-soled shoes and a snorkeling kit on before exploring their beautiful water!

After a hot day at the beach, don’t forget to explore downtown and sample some local Grk wine. The Old City of Korčula is car-free, which makes it a delight to walk around. While there, you can also visit the house where Marco Polo was rumored to have lived.

A paradise during the warmer months, Kravice Waterfalls are located two and a half hours by car from Dubrovnik. Amidst the beautiful natural shrubberies, a series of waterfalls cascade into a crystal clear Nereveta River.

Think lush greenery, a cool atmosphere, and vendors selling ice cream at the feet of the waterfalls, a very welcoming sight during hot summer days. The Kravice Waterfalls resemble a mini Niagra Fall in breadth. On sunny days, you can even see mini rainbows reflecting off the water drops. If you’re feeling adventurous, cool down with a swim in the water or rent a kayak to explore the surrounding waterways.

Though a little far away, a day trip from Dubrovnik to Venice is definitely doable. The best way to reach Venice is to take a ferry, which takes around 9 hours and costs 55 Euros each way. You can also take a bus from Split to reach the city.

Venice is undoubtedly one of the most romantic cities in the world. Originally built on 100 small islands in the Adriatic Sea, today the Venetian canal system adds to the city’s timeless charm. Catch a ride on a gondola, followed by Italian food at a local restaurant, for the perfect date night. 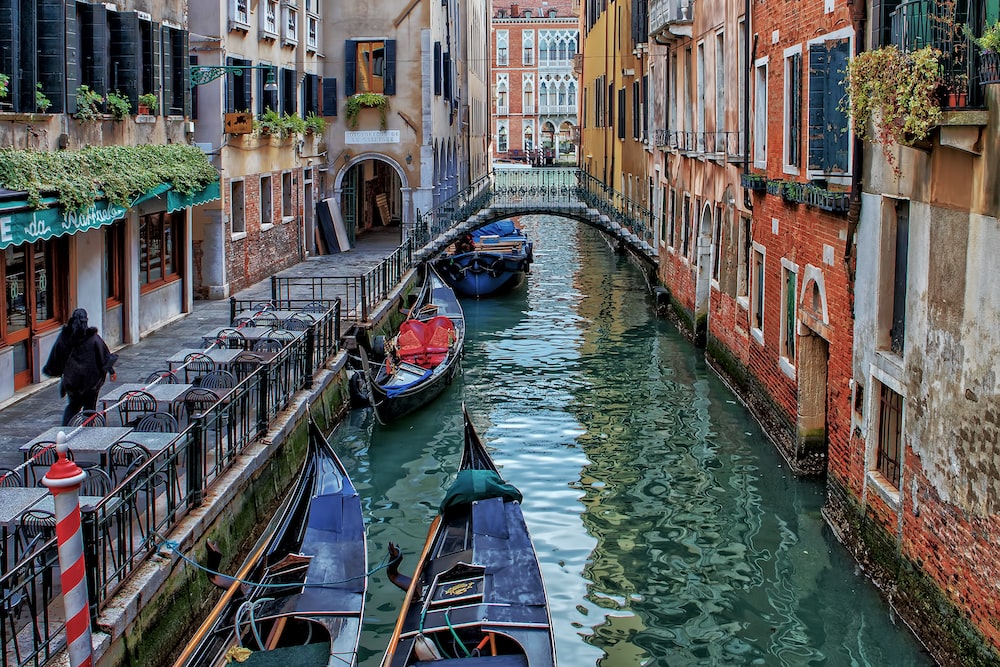 A must-visit place for food enthusiasts is the famous Piazza San Marco. Other popular places to visit include Doge’s Palace, St. Mark’s Square, and the Bridge of Sighs. When here, eat like the Venetians and order a Cicchetti, a small plate of snacks often served in Italian bars.

Enjoy your day trips from Dubrovnik

We hope that this list is useful for planning your day trips from Dubrovnik, whether you’re planning a day trip to Mostar and Kravice Waterfalls, or a longer trip from Dubrovnik to Venice.

While Dubrovnik isn’t yet a very popular destination like cities in Portugal or Italy, it’s gaining a bigger presence among travelers thanks to the media. Needless to say, Croatia is a gem waiting to be discovered!