Just recently I had the time to take a long awaited journey back to my favorite city, New York City. I decided that with a close friend doing an internship up there, and the winter season closing in, I should make the most of a trip in November.

Let me start from the very beginning…

It was Thursday night and I rushed home from work to finish packing up my new Herschel Little American Backpack full to the drawstring with stuff. I would quickly learn that I packed too much for this trip, but those are minor details. 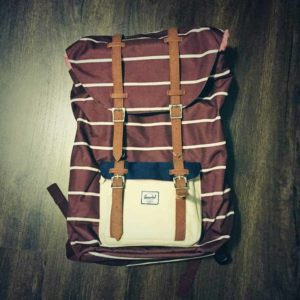 It was 7:00PM and I was frantically strategizing what clothes to bring to ensure I had enough to wear while also keeping space for other essentials in my backpack. Finally, I made a decision. With it being the start of the colder season, I knew my coat would be on most of the time anyway, so the Christmas sweater would not make the cut this trip.

Just kidding, I didn’t actually think about packing that.

My bus was set to leave for the trip at 11:00PM so I paced in excitement for a few hours until I finally conned my oh-so-gracious roommate Orion to take me to the bus stop. Was this a normal bus stop? Of course not. Instead of boarding at the normal bus station, this bus line had their own little white walled, foldable chair storefront on a busy Columbus downtown road. No big deal, I didn’t care I just wanted to get going.

Finally the moment I had been waiting for. I heard the guy behind the counter yell that the Bus2NYC Columbus bus had arrived. We followed him outside and on the side of the street was our oh-so-sparkly bus. (a bit of prefaced sarcasm)

I boarded our bus to find that there were a handful of passengers already in deep sleep (or at least pretending to be). It turned out to be fine, there were few people taking the bus and I lucked out with my very own row of two seats.

Being a bus riding newb, I barely knew how to behave in this world. Do I work on my computer? Do I lay on the seats with my 6’3” stature while hanging over the other’s rows of seats? Or do I sit there and think about this the entire bus ride of eleven hours.

I decided to do something about it. I tried writing a bit, and then my neck got sore. I tried sprawling out, and then my greed was too overbearing. Finally, I settled on a happy medium, the fetal position.

With my coat under my head, and my earphones in, I was able to get spouts of rest between the unbearable heat they cranked up and the eerie times we stopped on the side of the rode to shut the bus down “for a little while.”

We never did figure out why they did that…

“Creak” I heard and instantly woke up and found ourselves at a gas station to take a break. All of us bus riders filed out of the bus and into the convenient store. Perhaps the funniest site to see is 50 people half awake, barely knowing where they were and what they are looking for in the store.

I couldn’t help but laugh, but I knew I looked the same exact way.

We all boarded the bus and made our push towards NYC once more. After one more stop, and a few conversations with future bus friends later… we were in China Town, NYC!

As I disembarked the Bus2NYC bus from hell, I was surrounded by the sites and sounds of NYC. I had finally made it “home.”

At this point, it was Friday morning and I had the entire day to walk around with absolutely no plans. My friend who I was staying with for the weekend was at work for the day, so I was left to figure the day out (which is what I love). I walked, and I walked, oh and I walked some more.

I then realized that this would be the perfect opportunity to meet people I had met online who live in the city. So I did exactly that.

I texted a photographer named Steven Turner, who I had networked with online to see if he wanted to meet and get lunch. Badabing-badaboom, he did! We met up and went to get some extremely delicious Pad Tai

After that, since I had no clue where I was going, he and I ended up walking the city for the rest of the day until my friend got off work. It was awesome having him show me around the city more (and not all the tourist traps) and getting to talk with him more in-person.

The evening came, and my friend Audra was finally out of work and ready to chill for the weekend.

We ended up eating out with some of her friends and boy was the food great at the restaurant called The Hummus Place.

After that, we went back and relaxed for the evening before getting the random but undeniable craving for a Sprinkles cupcake ATM walk. Yes, it’s an ATM that spits out fresh cupcakes. I kid you not.

We ate those, and then to bed we went in preparation for a Saturday full of fun!

So Audra required me to make a short list of things I wanted to do while in NYC. This was more difficult than I had imagined. We ended up settling on a few fun tasks: 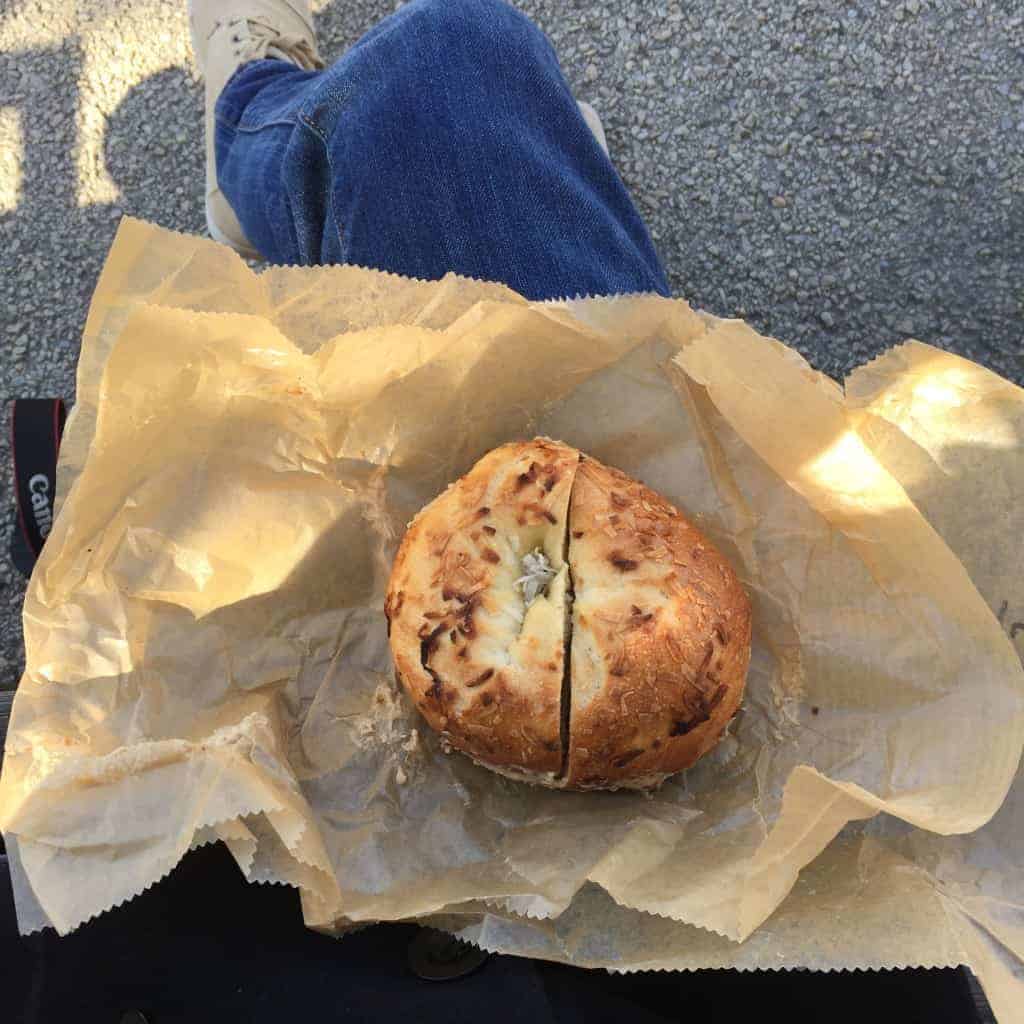 We visited one of the bajillion bagel shops in NYC to get these huge bagels. I got a coconut bagel toasted with Maple Bacon cream cheese… It was more than amazing. I wish I could share the deliciousness with you, but I ate it too quickly. 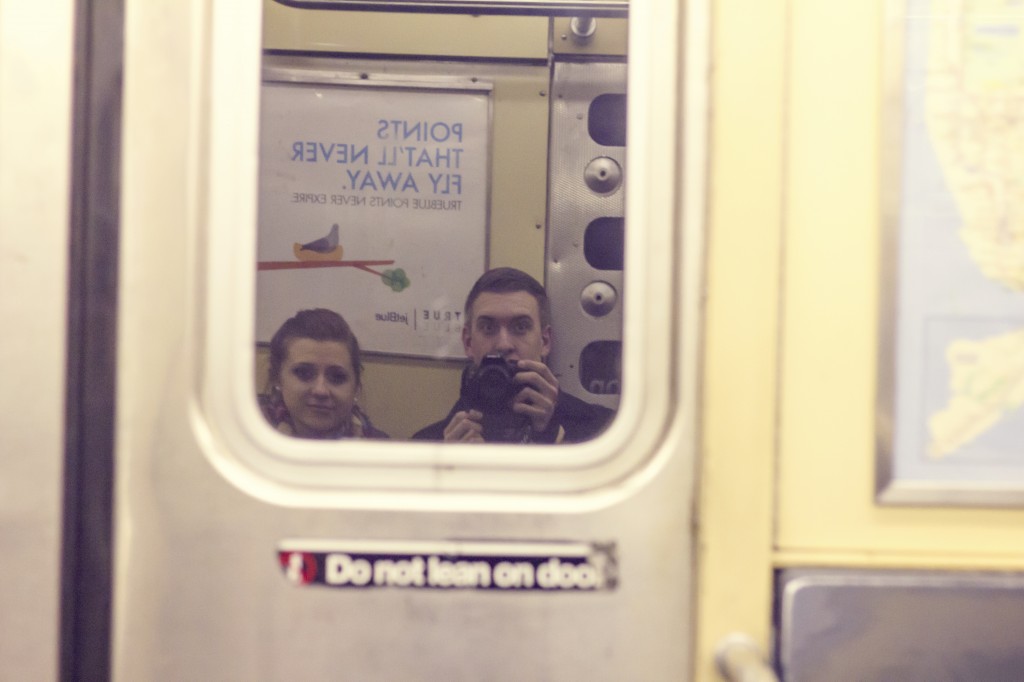 Uneventful task, but we got it done as we ventured to Brooklyn.

I instantly fell in love with Brooklyn when we visited it. There is something more relaxed and quieter that is pleasant to have so near to the bustling city of New York.

4. Drink a Manhattan in Manhattan

I guarantee we did this on Saturday night, but sadly I have no picture to prove it. So here is a photo of us at the Karaoke night! 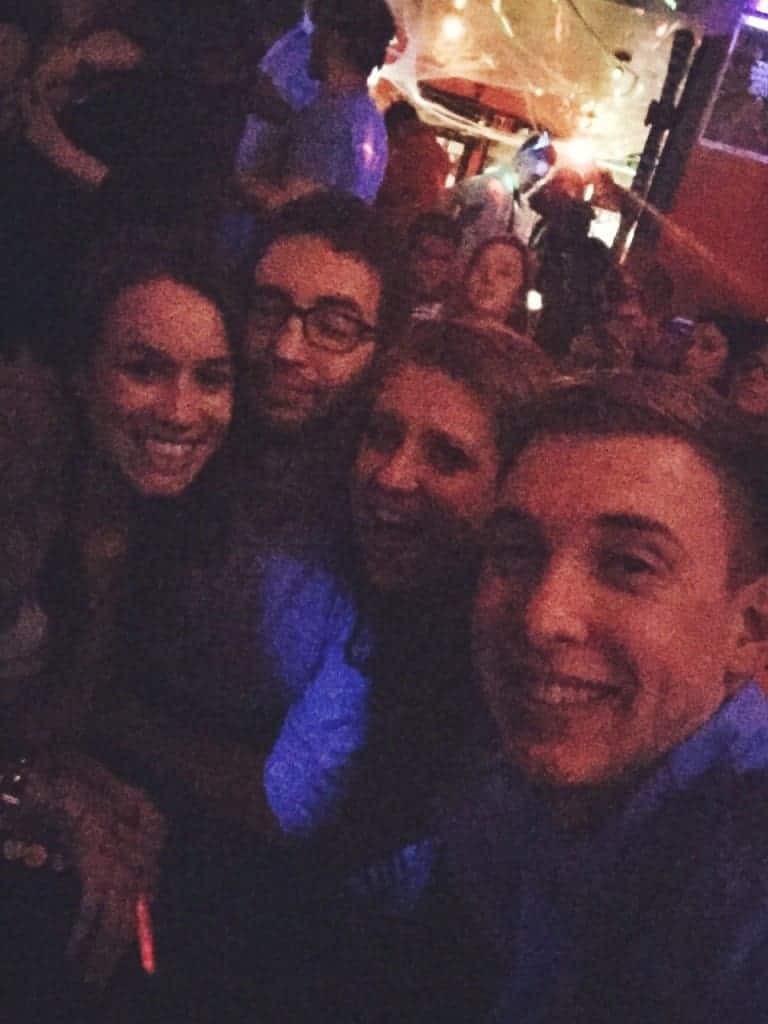 The night concluded with us walking home and passing out… So much for Time Square at 4AM. We just couldn’t stay awake.

After a long drawn out morning of figuring out how to wake up and feel human again, my friend and I went out into the NYC world to attempt to act human for the day. We managed to walk the night before off and hit local sweets, sights, and general fun.

As it got later and later in the Sunday, I was getting closer and closer to my bus departure time. We finally made our way back to her apartment so I could pack up and prepare for the long trip home. Reluctant to leave, I finally willed myself to begin the 40 minute walk back to China Town.

Since it was 8:00PM, it was plenty dark already and made for a wonderful journey back to my bus stop.

I got to the bus stop plenty early, so I stopped at a Dunkin’ Donuts to load up on sugar. The lady behind the counter was so kind, she even threw me a couple extra donuts!

Time passed, and then boom I was on the bus 30 minutes earlier than expected. I was thinking how great this was to be early!

And then a lady lost her cool…

What turned out to be a 30 minute early departure ended up being an hour late departure. The lady screaming at the top of her lungs sat at the front of the bus demanding that the driver had let her on the bus. Finally, the cops came and it all got sorted out. Her and her gaggle of girls ended up on our bus.

No one was happy about it.

After that fight, the rest of the trip home was uneventful. We made it into Columbus, Ohio promptly at 7:00AM where I woke up to us stopping. I got out of my seat, grabbed my bag, and said my “nice meeting yous'” to a girl that I thought was cool during the trip to and from (foolish Ian fails to even get her name) and then I disembarked the bus.

Normal people would go home. But since I was only a few blocks away from work, I just rolled in early. Same clothes from the previous day, but I didn’t care.

So as you can see, that was a quick run down of some of the best moments during the trip. I could easily fill this out to be a longer story, but I want you to instead experience your own trip. Book a ticket today to get yourself to NYC for a weekend. It will be the best money you will spend this year.

For me personally, this was my second trip to NYC this year. I can tell you that this is the place I see myself living for longer periods of time in the future. NYC in my opinion is in a way its own little nomadic adventure. You could live there your entire life and always be exploring and discovering new things.

If you take nothing away from this article, at the very least try the New York City experience for a weekend and then tell me how it goes.

I want to give a shout out again to my good friend Audra for allowing me to chill with her over the weekend and show me where all the cool stuff is. Thanks so much!

This website uses cookies to improve your experience while you navigate through the website. Out of these, the cookies that are categorized as necessary are stored on your browser as they are essential for the working of basic functionalities of the website. We also use third-party cookies that help us analyze and understand how you use this website. These cookies will be stored in your browser only with your consent. You also have the option to opt-out of these cookies. But opting out of some of these cookies may affect your browsing experience.
Necessary Always Enabled

Performance cookies are used to understand and analyze the key performance indexes of the website which helps in delivering a better user experience for the visitors.

Analytical cookies are used to understand how visitors interact with the website. These cookies help provide information on metrics the number of visitors, bounce rate, traffic source, etc.

Advertisement cookies are used to provide visitors with relevant ads and marketing campaigns. These cookies track visitors across websites and collect information to provide customized ads.

Other uncategorized cookies are those that are being analyzed and have not been classified into a category as yet.